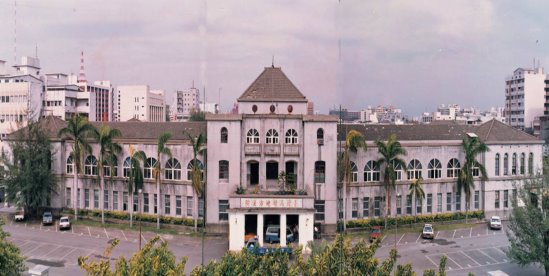 The Kaohsiung District Prosecutors Office, while still under Japanese occupation, was first located in " Shanhsia Road, Gushan District, Kaohsiung City". Since the office facility was almost ruined by the allied air forces in the Second World War, Chief Prosecutor Lu Tang, Hu, who headed this office soon after the Republic of China regained autonomy from Japan in 1945, was allowed to use the then Kaohsiung Commercial School. In 1946, the office moved again to Nr. 188, Hedong Road, Chianjin District, Kaohsiung City, the current address today. The office building was conveniently situated near the Love River, surrounded by beautiful scenery, where people had good views of Wanshou Mountain. With the increasing population and economic growth of the 1970s and 1980s, the prosecutors office faced higher crime rates. As a result, more personnel and greater office space were needed. It was not, however, until 1986 that the original office building was demolished and a new one rebuilt at the same location. Since then, the new eight-storey building, including a two-level basement, has been used as a main office for the Kaohsiung District Prosecutors Office.

The new 4492.85 square meter office building, shared by this office and Kaohsiung District Court, has a stately and solemn appearance. Due to increased personnel, the office rented additional accommodations, situated at Nr. 245, Jungieng 4th Road, Chianjin District, Kaohsiung City（tel:07-2152565）, for the Rehabilitation Officer Office, the Enforcement Section and other administrative offices. The Loot Storage and the Archives are located at Nr. 79, Chungjeng Road, Tzuoying District, Kaohsiung City（tel: 07-3459809）.